Air pollution from ships is on the rise and global emission standards are getting stringent every year. MARPOL Annex VI limits the main air pollutants contained in ships exhaust gas, including sulphur oxides (SOx) and nitrous oxides (NOx), and prohibits deliberate emissions of ozone depleting substances.

The main changes to MARPOL Annex VI are a progressive reduction globally in emissions of SOx, NOx and particulate matter and the introduction of emission control areas (ECAs) to reduce emissions of those air pollutants further in designated sea areas. NOx Emission Tier III standard will be enforced from 1st Jan 2016 in Emission Control Areas (ECA) as per the latest MEPC 66 meeting. 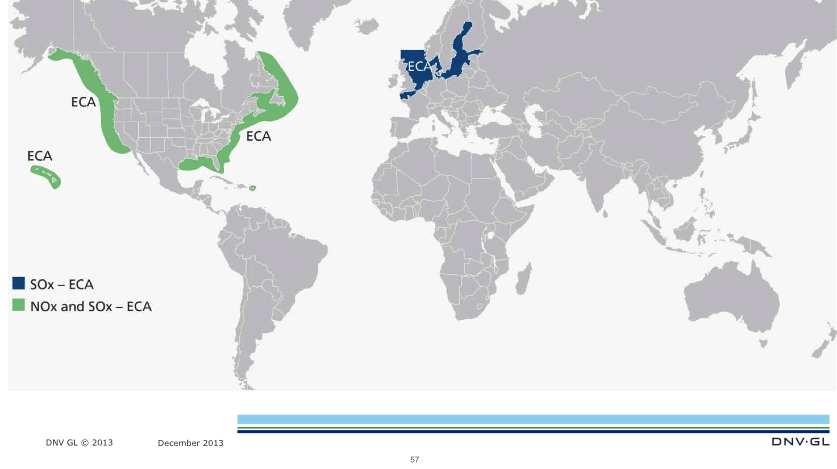 What is NOx Tier III ?

The emission value for a diesel engine is to be determined in accordance with the NOx Technical Code 2008 in the case of Tier II and Tier III limits.

As per Marpol Annex –VI Tier III limits are : 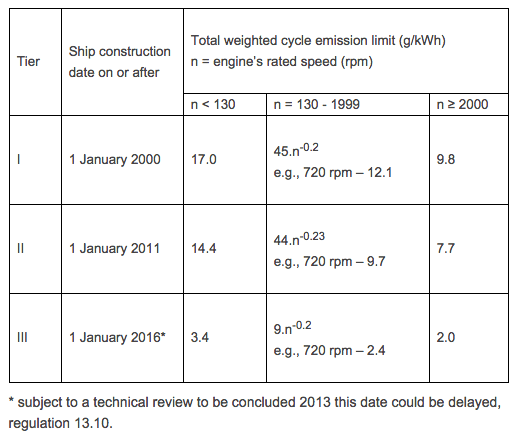 Tier III standards will also be applicable to ships built on or after 1 Jan 2016.

Are the ships ready for the emission standards?

To comply with this Tier III requirements ships shall have to be installed or retrofitted with equipment/systems which can reduce NOx below Tier III standards.

Mentioned below are seven technologies available to meet this criteria.

In this system, urea or ammonia is injected in the exhaust gas before passing it through a unit, which consists of special catalyst layer, at a temperature between 300 and 400 Deg C. Chemical reaction between Urea/ammonia and NOx in exhaust gases reduces NOx (NO and NO2) to N2. SCR unit is installed between the exhaust manifold/receiver and the turbocharger.

High efficiency turbocharger is required for this system as there is pressure drop across SCR Reactor. Engine load should be 40% and above, as NOx is reduced to N2 within specific temperature window ( 300-400 Deg C).

If temperature is above 400 Deg C, ammonia will burn rather than reacting with NOx which will lead the system to be ineffective. If the temperature is below 270 Deg C, the reaction rate will be low and the ammonium sulphates formed will destroy the catalyst.

->Some Wartsila engines also has NOR (NOx Reduction) system that uses SCR technology.

More than 90% reduction is achieved by using SCR technology to comply with Tier III emission standards.

In this technology, part of the exhaust gas after turbocharger is recirculated to scavange receiver after passing it through the scrubber ( exhaust gas washing ) unit. Around 50-60% NOx reduction from tier I is claimed by making use of EGR. However discharge of cleaning water requires treatment like purification and separating exhaust gas cleaning sludge. As some countries are against discharge of this water, re-using this water poses corrosion problem.

NOx reduction takes place due to reduction in excess air (oxygen content) used for combustion, addition of CO2 and water vapour reduces peak temperatures as both have higher specific heat than air.

EGR system along with combination of one of the technologies such as altered (delayed) injection method, new design fuel valve, common rail injection principle, electronic engines , Scavange Air Moisturizing, can be used to comply with Tier III standards. 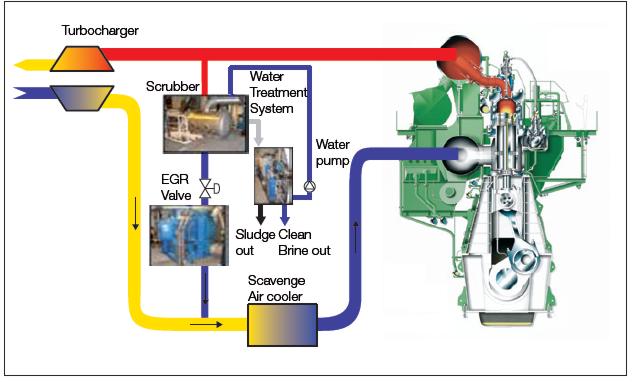 Air from the turbocharger, after passing through the compressor, has high temperature. Seawater is injected to this high temperature air for cooling and making it saturated. Distillation process makes it possible to use sea water instead of fresh water. Humidification of air is controlled by maintaining scavenge air temperature between 60-70 Deg C. Water in saturated air reduces the peak temperature as water has higher heat carrying capacity than air.

Around 60% NOx reduction is achieved by this method. By using combination of other technologies such as EGR  with Scavange Air Moisturizing, NOx Tier III standards can be achieved.

By making use of Miller cycle in 4-Stroke engines along with high efficiency turbocharger, that is, early closing of inlet valves before BDC, causes expansion and cooling of intake air which reduces NOx production. This NOx reduction method will require two turbochargers ( 2-Stage turbocharging).

This method along with Direct Water injection (DWI) Principle and other methods such as fuel water emulsion can bring NOx well below Tier III standards.

5. Use of Low Pressure Gas Engines :

New marine engines using low pressure LNG as marine fuel will have greater importance in meeting Tier III standards. Wartsila has developed 2-stroke DF technology engine which makes use of low pressure LNG as fuel. It is based on lean-burn principle (relatively high air/fuel ratio), in which, the pre-mixed air/fuel charge is ignited by pilot fuel. One of the most important aspects of this engine is that the emission are below NOx Tier limit, and this is achieved without use of exhaust gas treatment system.

6. CSNOx : Ecospec have developed a system known as CSNOx which uses fresh water or seawater to pass through Ultra Low Frequency Electrolysis system. This treated water is further mixed with to react with the exhaust gas to reduce NOx content. The system reduces CO2, SOx and NOx in one compact equipment. This technology along with other NOx reducing methods mentioned above can be used for compliance with Tier III standards. CSNOx has an advantage of achieving high efficiency with low maintenance and power consumption. 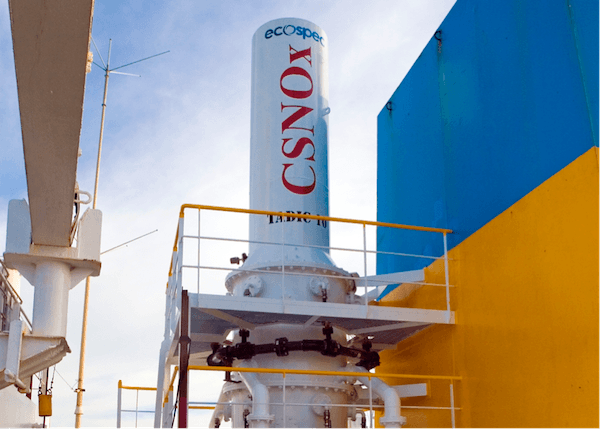 7. Combination: Combination of Technologies having one or more combinations such as electronic engines with variable fuel timings, LNG as fuel or Direct water injection or Fuel in water emulsions etc with other NOx reducing methods can be used to comply with Tier III emission standards. These mentioned combination may or may not require exhaust gas scrubber to comply with Tier III norms.